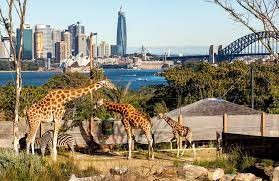 Taronga Zoo is just 12 minutes from the city by ferry, with breathtaking views of Sydney Harbour and free shows and keeper talks throughout the day.

The first public zoo in New South Wales (NSW) officially opened in Sydney in 1884 on a site known as Billy Goat Swamp in Moore Park, operated by the Zoological Society of NSW which was founded in March 1879.

After a visit to Germany in 1908 the elected Secretary of the zoo, Albert Sherbourne Le Souef, returned with a vision for a new Sydney zoo, based on the bar-less exhibits of Hamburg Zoo. The site at Moore Park had become too small and was not suited to the vision. A new site for the zoo was sought. On April 24th, 1912 the NSW Government granted 43 acres of land north of the harbour which were part of Ashton Park. Another 9 acres were granted in April 1916.

In 1913, Management of the zoo passed to a Trust named the New Zoological Gardens Trust which became the Taronga Zoological Park Trust.

The first exhibits to be built were the seal ponds, elephant temple, monkey pits, top entrance, aviaries, paths and roadways and the refreshment rooms. In all, 228 mammals, 552 birds and 64 reptiles were moved from Moore Park to Taronga. Many, including the elephants, crossed the harbour on board a flat top barge.

New exhibits and facilities were developed over time. The Giraffe House was completed in 1923, the Aquarium in 1927, Floral Clock in 1928, Tahr Mountain in 1932 and the Tiger Pits in 1939. Under the directorship of Edward Hallstrom in the 1940’s – 1960’s several new exhibits were built including those for larger cats, koalas, apes and gorillas.

After a critical review in 1967, a new era in the style and philosophy for the operation of Taronga began which reflected the new emphasis on scientific research, conservation and education. Many new exhibits were built starting with the Platypus and Nocturnal Houses, waterfowl ponds and walkthrough Rainforest Aviary. A Veterinary Quarantine Centre was built as was an Education Centre (funded by the Department of Education). Previous attractions such as elephant rides, miniature trains, monkey circus and merry-go-round gave way to educational facilities such as Friendship Farm and Seal theatre.

Recent history has seen the Board further develop its research, conservation and education activities. Joint research projects are being undertaken with a number of institutions. Unique sub-units and partnerships were also developed, such as the Australian Wildlife Health Network, the Australian Marine Mammal Research Centre, The Taronga Training Institute and other associated capabilities.

In 2008-2009 the Board was renamed the Taronga Conservation Society Australia to better reflect the range of national and global initiatives in its make-up.

In its long history, Taronga Zoo has only been closed twice. Once from August 8th – October 26th 1917 when the site was used to house labourers employed on the Sydney wharves during the transport strike and once on Australia Day 1988 to commemorate Australia’s Bicentenary.

We enjoy the blend of decor from colonial to industrial, it is interesting and we love that the Australian heritage has been preserved in such a way.